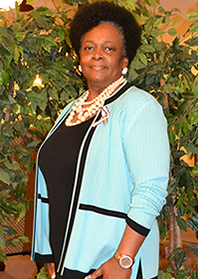 Missionary Delores J. Tillman is a native of Jackson, Louisiana. Born August 10, 1954 to her loving parents, Linnell Jackson and the late Simon Jackson, she is the middle child of their union.

Secularly, she attended the former Hammond Vocational School, now Hammond Technical College, where she received formal training in Business. She is the Executive Director of the Hammond Housing Authority, where she has worked for over twenty-four years.

Missionary Tillman serves in several capacities, not only locally, but also on the district and jurisdictional level. She is the District Missionary under the leadership of her Pastor and husband, Superintendent John Tillman. She is a member of the jurisdictional Mother’s Advisory Board, to Eastern Louisiana 1st Jurisdiction Mother, Dorothy Richardson.

Missionary Tillman has effectively ministered to Saints nationwide. She has founded several unique ministries in her local Church, one of which being the Women of Hope Ministry. It is a ministry that reaches beyond the four walls of the Church and ministers to the need of women and children from every walk of life.